ECU Remapping, Flash Tuning, ECU Re-flash, whatever you would like to refer to it as, is becoming more mainstream, but believe me there is a difference between these terms.

As more and more businesses attempt to join this industry, it is alarming at some of the work, and rework that we have been seeing lately. Petrol performance tuners, are now jumping on-board the Diesel Tuning bandwagon and are increasingly becoming more common in their scope (some of which can do a reasonable job, whilst others you wouldn’t let touch your lawn mower if you saw what we see), and even some who have no mechanical qualification or formal training are now performing “Flash Tunes” at a scary rate, in an attempt to make a quick cash grab. Some even drive around performing “carpark tunes” for as little as $500.

There’s a lot of mystery and a lot of questions around this topic as it becomes more mainstream to the general population. Let’s not beat on for hours but give you a quick rundown;

An ECU Remap is not a simple “Flash Tune” – “Flashing” is simply the action of loading a file to the ECU EEPROM or Flash Memory generally via the OBD2 (Onboard Diagnostic Plug) in the vehicle.

There is now A LOT of workshops and individuals claiming to perform “ECU Remaps” who simply flash a file to your ECU that is most often purchased from a file provider from a library somewhere, whether it be Europe, or in rare cases, even Australia. They will market by using terms such as “Developed in Australia for Australian Conditions”… Yes it was probably developed in Australia… on ONE vehicle, possibly in ANOTHER STATE, under DIFFERENT CONDITIONS. It is important to note that NO TWO VEHICLES ARE THE SAME, so there is NO TWO TUNES THE SAME.

Flashing a file usually takes anywhere from 5, to 15 minutes, requiring someone to press enter on their keypad, and turn the ignition key on and off two or three times. Your $1500 doesn’t seem so well worth it when you think of it in that respect right? Of course not!

We’ll outline a few points below for your visual understanding. In this case, we’ll showcase it in AlienTech software as it is easier to comprehend than some other suites available.

Seen this screen before in advertising for ECU Remapping? Read on… 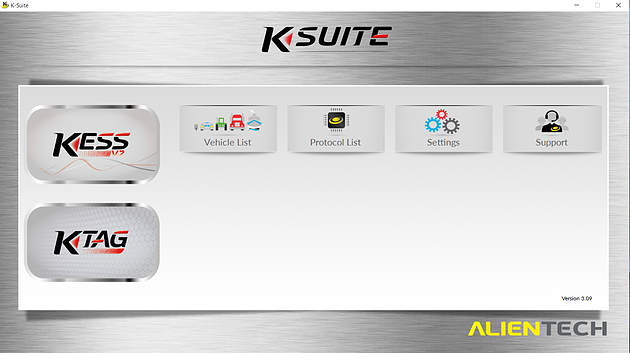 Of course you have. This is the screen that leads to the Flashing Protocols for loading files to your ECU via the OBD2 Port, or direct to the PCB contained within your ECU. Virtually anybody can be trained to select the vehicle type, select a file and press the enter button as we mentioned. Perhaps 20 minutes worth of work for your hard earned cash? Sounds terrible does it not?

Seen this screen before in advertising for ECU Remapping? We’ll bet not, so read on… 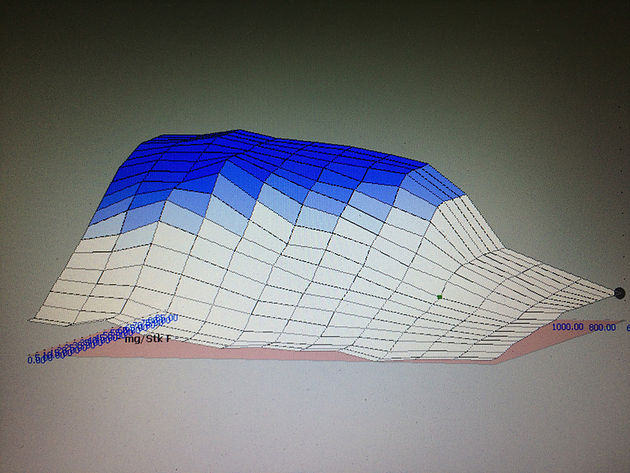 Of course you haven’t. Why? Because most of your tuning providers cant even see this, as they are simply, and blindly, loading a file into your ECU, seeing only the screen we showed you before.

This image shows a map within the ECU of a late model Toyota Landcruiser representing Turbo Boost Pressure and what we refer to as “Wastegate Duty Cycle”. If you don’t understand those terms, don’t stress, some “tuners” probably don’t understand how they work either. Take particular notice of the waves, dips and peaks in the little squares, noticing how inconsistent they are. Here you have a “Flash Tune” bough right from a library somewhere and loaded in – nasty!

We saw this vehicle after it had been to another provider nearby, who offers “ECU Remap software developed in Australia for Australian conditions”. Now let’s get one thing straight – NONE of this software is developed in Australia. The map displayed had had an increase of 10% applied to it in all areas; Not always bad in some cases, but in this one, far from ideal;

Little did they take into consideration that at 90% Duty Cycle, with the Wastegate Actuator being 90% closed, they’d actually closed it off, potentially entirely. Not only was it terrible to drive, causing hesitations and Turbo “Flutter”, but given time, the nozzles that operate the VGT system would’ve potentially caught and caused a turbo failure in the future; not ideal when you’re towing your caravan to Alice Springs, have no phone reception to call a tow truck, then add the bill and the inconvenience – what a nightmare. 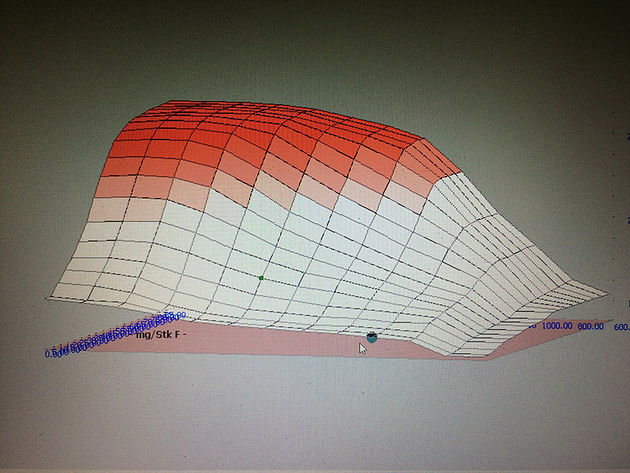 Here is the same map, in a corrected form, displayed in 3D for visual understanding. You will notice that is much smoother in it’s progression, ridding all the divets, drops and peaks. Here you have the difference between a simple “Flash Tune” and a professional ECU Remap, tuned on-site, by a certified technician, with formal training, to suit THAT vehicle.

This displays just one Map from the ECU. There are many, many more, so imagine what else is floating around inside there, and what other little goblins will decide to cause havoc later!

Let’s be clear here; we haven’t gone to the effort of writing this to take a swipe at a competitor, although we do get a bit passionate about doing the right thing for people. What we’ve done is try to educate you on what we see as a major problem, where we would prefer you at least speak to us before you fall victim to one of these providers. We feel if you’re going to charge a client $1500 or more, at least provide what you claim to, and do it in a professional manner.

This client of ours, has now paid twice, and as much as we’d love to do it for free, we too have families to feed and bills to pay, so the 3.5 hours spent on this vehicle does incur a charge. The positive of the situation is that this family won’t be pushing their Toyota and caravan to the nearest rest spot on the way to Alice, and it’s now nice and smooth to drive, still with plenty of pulling power for the trip ahead.

If you have questions, or would like to know more about our tuning services, don’t hesitate to pick up the phone and give one of our technicians a call, or simply drop us a message and we’ll get in touch right away. We’re hopeful that this has educated you some more, and potentially answers a few questions that might’ve been lingering in the back of your mind.

Diesel Tuning Brisbane are your first for enhancing the performance and efficiency for your Diesel vehicle. Our scope covers specialist tuning and diagnosis to full system overhaul and repair.

Google Review
Thanks Jordan for the great advise and fantastic results you and the team at Diesel Tuning Brisbane delivered in our new 2020 Land Cruiser Sahara. From my first phone call Jordans knowledge and experience shone through, he took the time to make recommendations give us options and explain the process and answer all our questions.We would certainly recommend Diesel Tuning Brisbane for any performance work. The difference in our Land Cruiser with the new DPFs and Tune is amazing.

Google Review
I recently had a new high flow DPF fitted to my 76 series LandCruiser. In the lead-up, I received prompt and detailed responses to all of my questions and it was easy to arrange a booking. Jordan's workmanship is neat and professional. I was also satisfied with the cost to have the work completed. The replacement DPF has resulted in smoother power, a noticeable improvement in fuel economy and resolved the excessive heat issue with the old DPF. I have no hesitation recommending Diesel Tuning Brisbane.

Google Review
Just had my Ranger Px Mk2 Tuned by Jordan . What a terrific improvement to my vehicle. Much smoother to drive and a nice improvement to it’s power for towing . Excellent and honest advice, from start to finish . Very Happy .

Google Review
Very happy with the service, Jordan's communication with the customer is excellent, great knowledge and workmanship. Highly recommend.

Google Review
I took my Hilux in to Jordan at Diesel tuning Brisbane a bit unsure, if I was doing the right thing. I explained what I wanted and he delivered everything I asked for and more. Unbelievable improvement I actually love driving my car now. Well worth the money and I would recommend them to anyone.

Facebook Reviews
I called Diesel Tune Brisbane as i was concered about the performance of my BT50. I spoke to Jordan . He was amazing from the fisrt contact. My Bt50 was blowing smoke and running a bit rough. After a very quick diagnosis Jordan advised I had 2 injectors that were in very bad condition and leaking . after he provided me with some photos and a great explanation of what was needed along with a quote. I agreed to go forward with the repair. Jordan also replace the timing belt and advised of a couple of things to look at at next service. My BT50 is now running great. Its responsive , runs clean and sounds good again.
Jordan done a great job and end cost was slightly less then quote..
I would highly recommend this business to anyone with a diesel.
Thanks Jordan .... Ill be back

Facebook Reviews
These guys did an immaculate job on my car. Jordan was very informative and and the office staff were proficient and helpful. I will definitely be coming back here for all my future services 👍🏽

Google Review
Thank you Diesel Tuning Brisbane! They were very helpful in my unique situation recently and helped me with exactly what I needed and more on the Dyno.. very friendly, great customer service and professional staff, was a pleasant experience. I will be going back for anything needing service from DTB, highly recommend! Great work guys and good luck in your new location looks great.👍👍👍👍👍

Google Review
I recently had DPF problems, called up Jordan at Diesel Tuning Brisbane and he was more than accommodating to fit me into his busy schedule. He explained the issue and provided me with several options and got my car back on the road ASAP.
Would highly recommend Jordan and will not take my car anywhere else from now on!